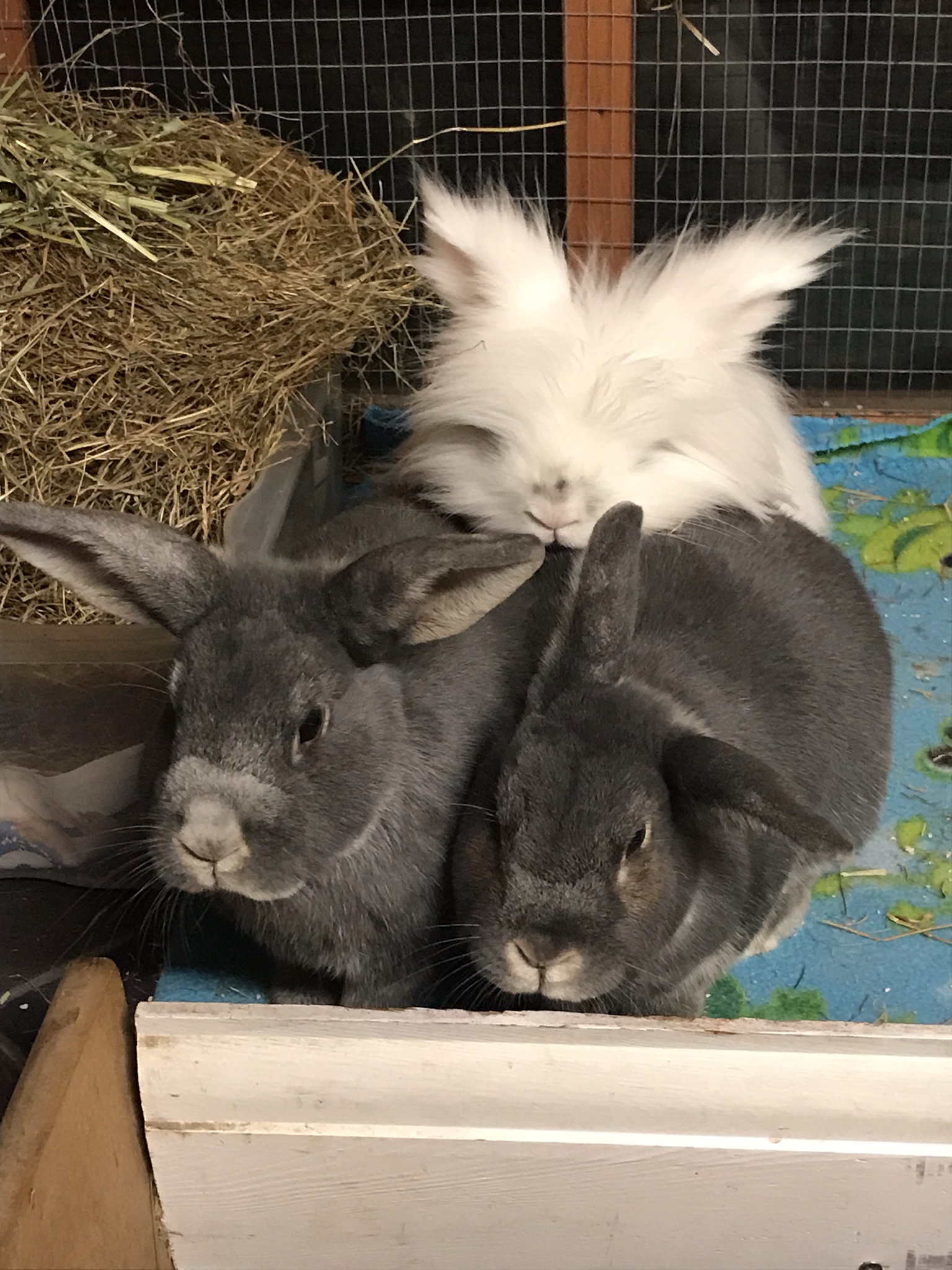 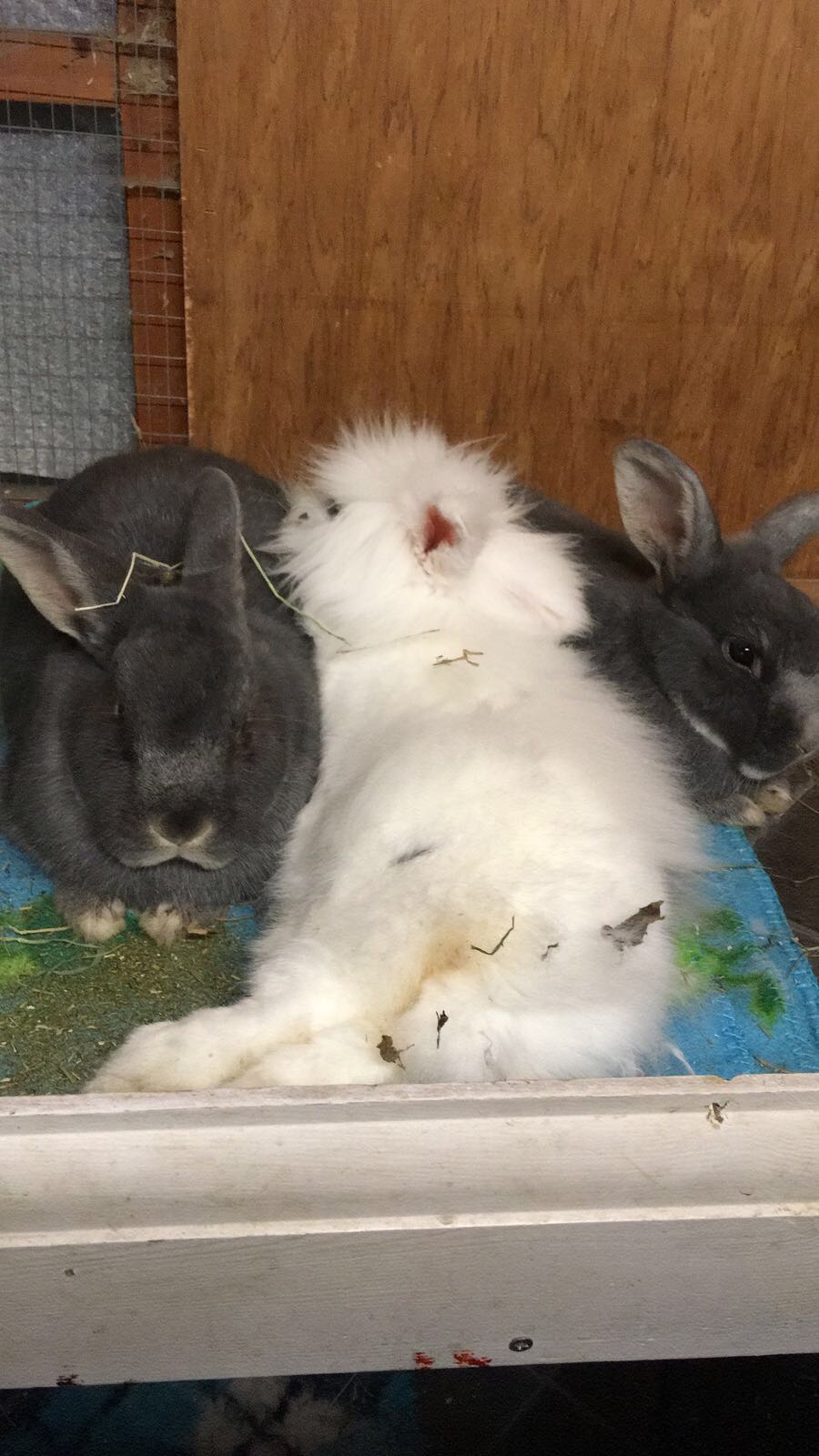 He's so funny but I don't think Maddie & Ned mind having him squidged in the middle!!

This is during early afternoon, the metacam should still be working and I don't think she is in much pain: 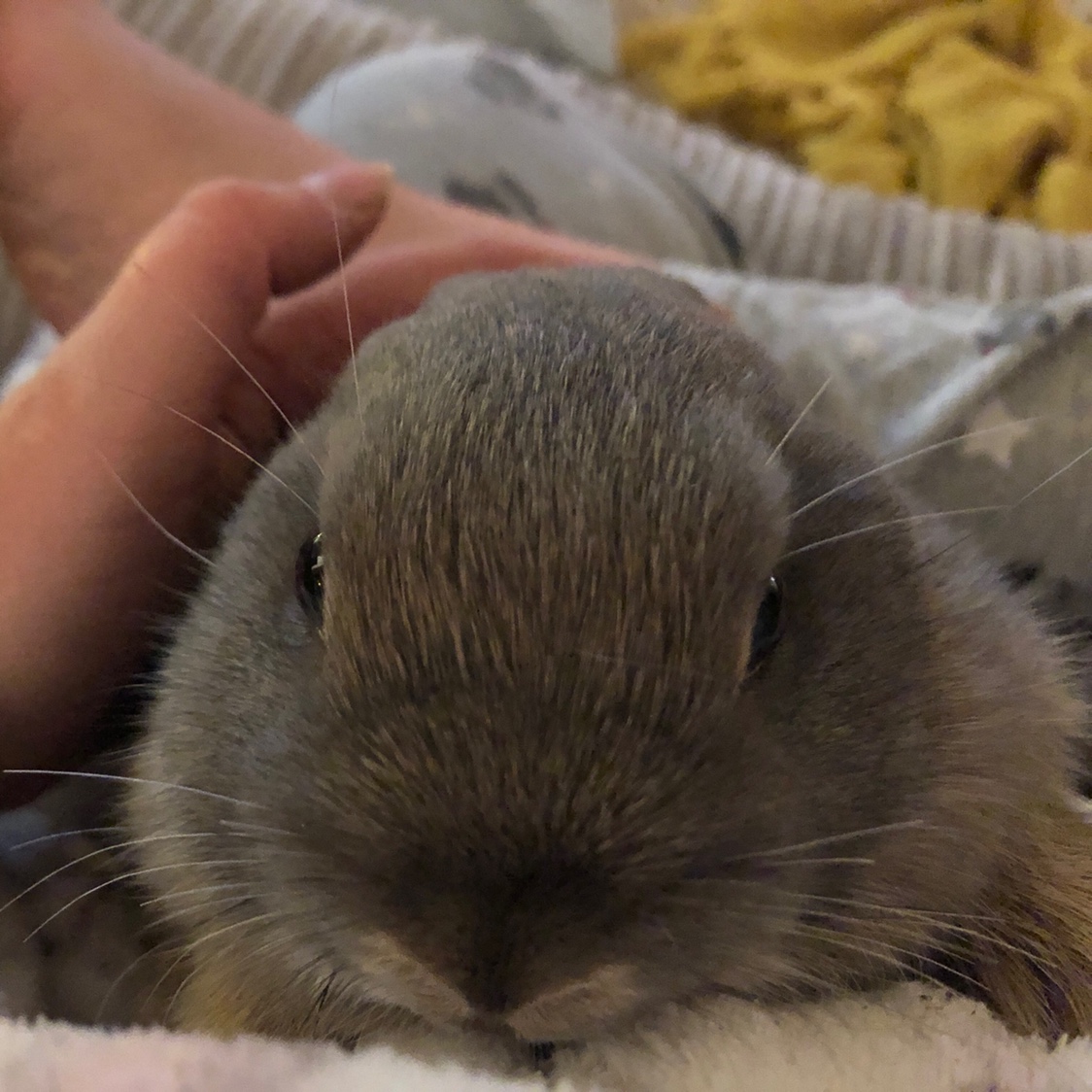 I've checked back to the photos of when I bought him home and you can see it there too but it's more faint. Therefore it can't be from his environment. 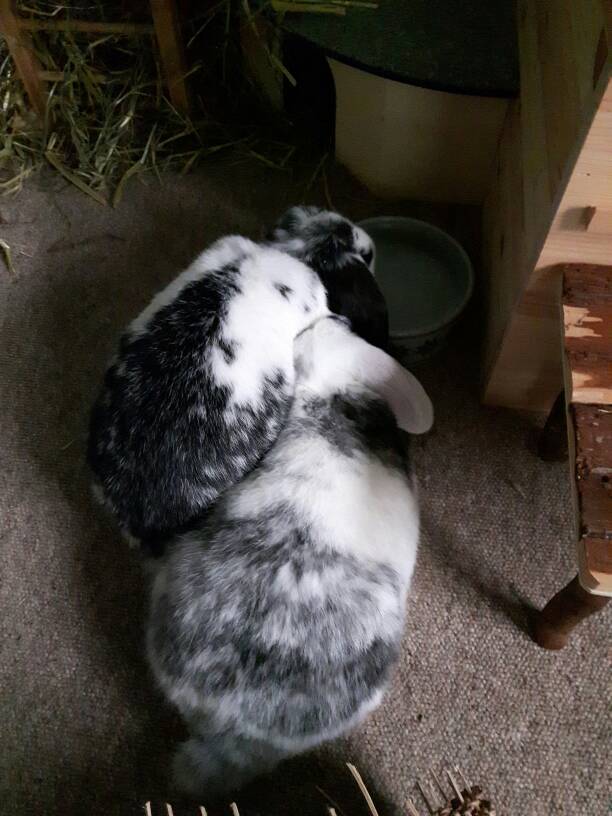 Daphne has become a bit clingy during her moult.... .... poor Phoebe can't do anything alone. Even a drink is disturbed by Daphne trying to climb under her.

Rabbit Residence Rescue rescued a family of rabbits from a garden a couple of months ago, the owner couldn't catch them and many of the babies were being ...

Archie does not like Mummy disturbing his snoozle time. He doesn't understand why he's been put back in his pen. He was quite happy destroying stuff. Lol "Oh my God... Where am I? Who are these people? Maybe if I just keep very still they won't eat me for dinner..."

This little bun gave us a bit of a scare last night but thankfully he's feeling a lot better today and you wouldn't even know he was ever feeling 'under the ...

Never in a million years did I think that such a little creature could have such a big impact on me. You were the most incredible bunny, you were my very ...

enjoying the grass. don't think they quite knew what to do with the grass at first but are now good little lawnmowers

Harlequin didn't even want to give it up when my daughter decided to join her. 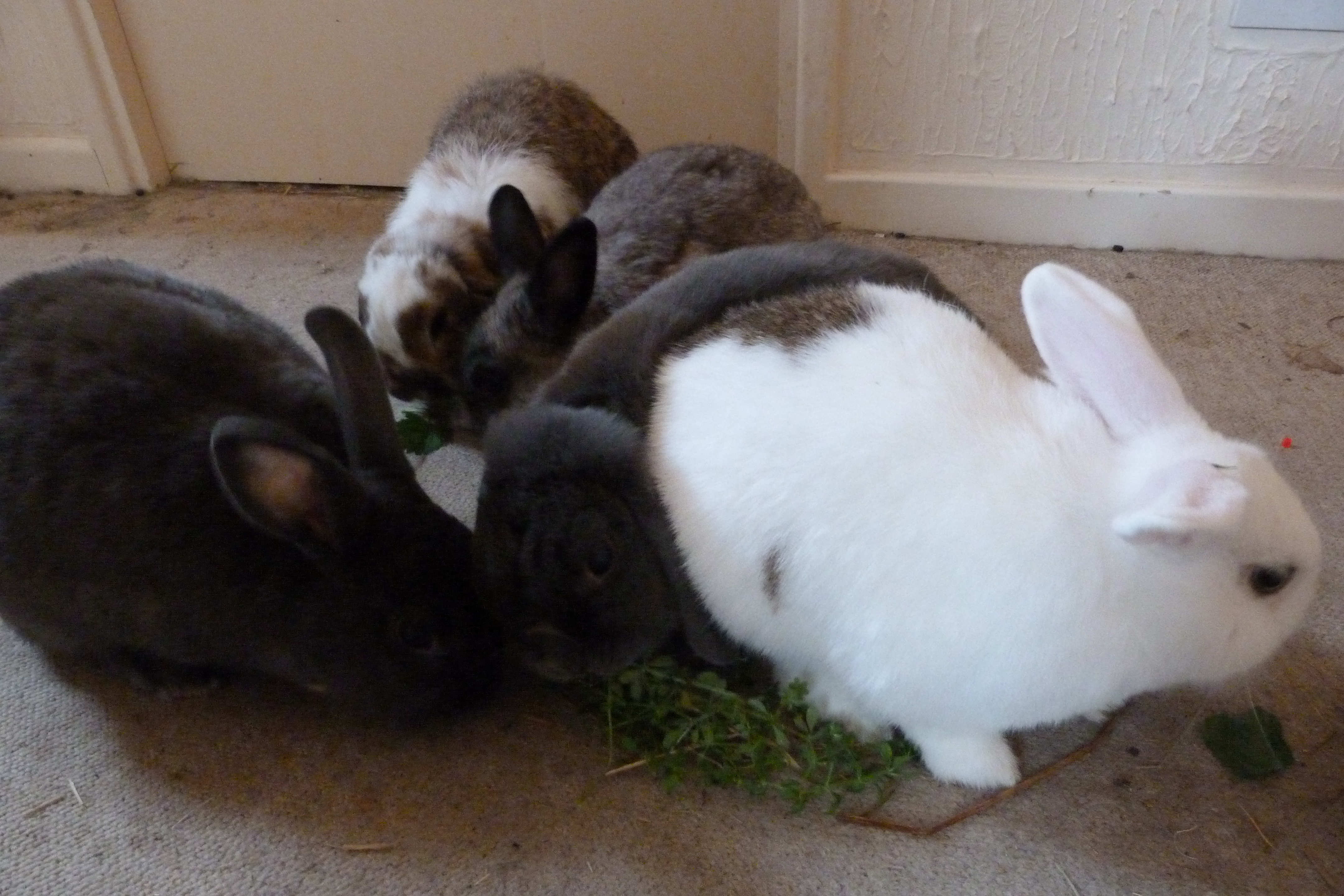 So Hoppy New Year from Elphie, Arce, Morningstar, Yuki, and Niji. Didn't I say? They all live together now! It's future prep, so yeah. 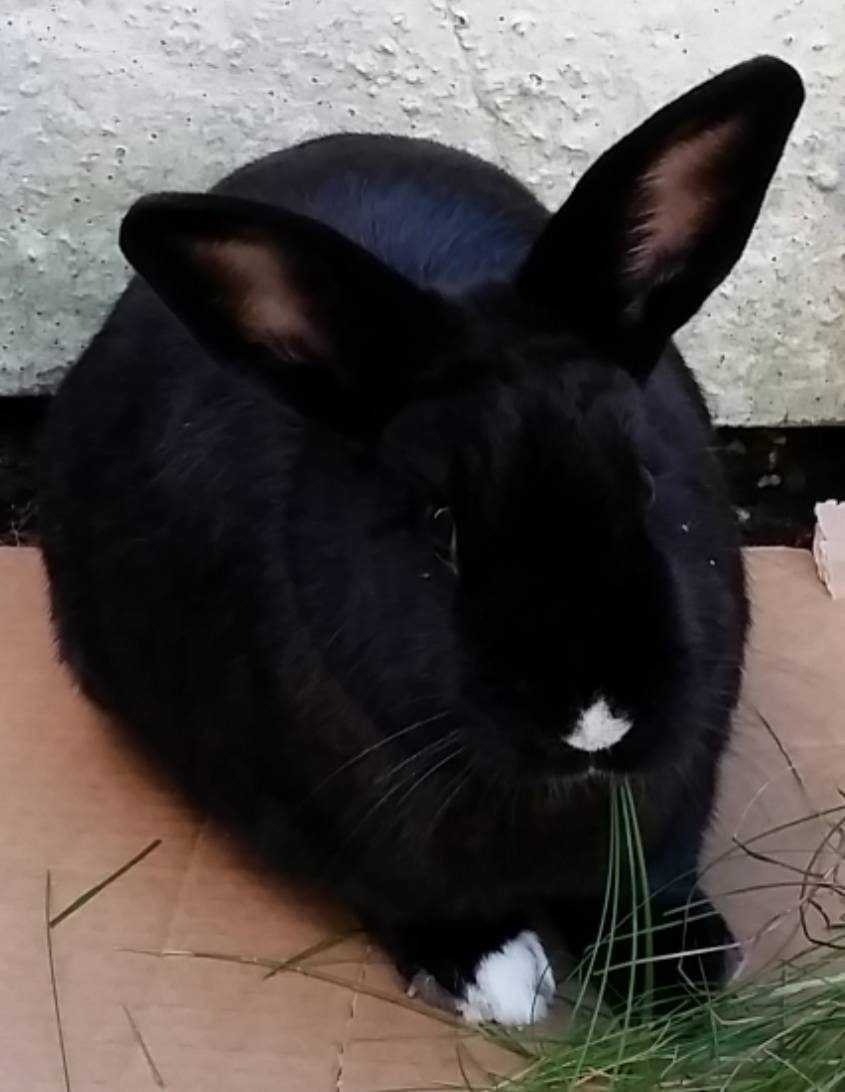 I couldn't leave Nancy out. I can't live without my girl

My vet is certain (and judging by her extreme behaviour too) that is isn't spayed. I bet it won't take long for him to be rehomed! 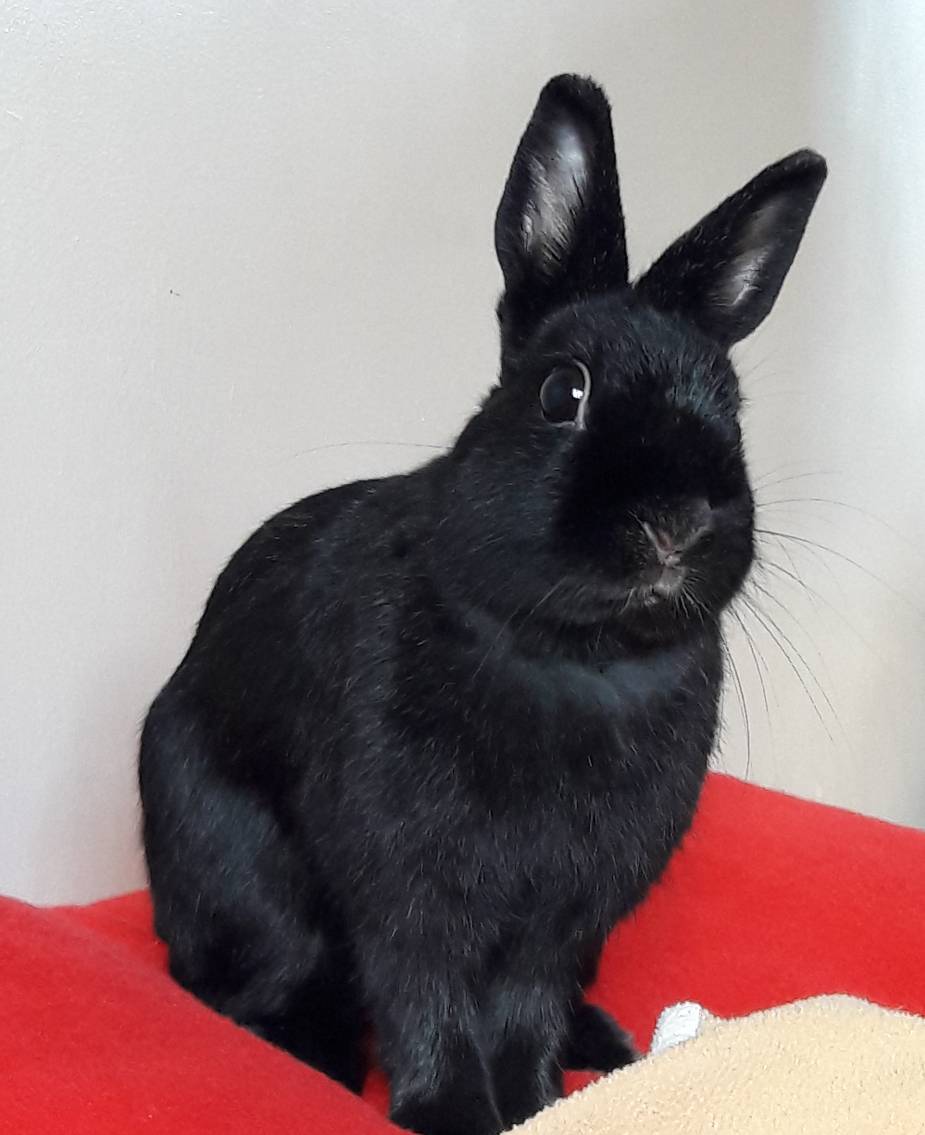 "Don't photograph well? What nonsense....look at my beautiful shiny coat!!!!"

Brindle is in a run/pen in the rabbit room however she has learnt to jump over out of the pen and jump back in. I don't see her do this but when ...

I don't have an agouti rabbit, but I had a cuddle from one last week. She has already appeared on this thread with her sister.

How comes they haven't got me a bed like this though

Piccolo has heart disease but you wouldn't know from this photo! Thanks so much to everyone who sent vibes for his recovery - with Fortekor and Frusemide ...

Obviously the shed isn't up to standard - Lillie decided to create her own home at the weekend. Steve did them at the weekend as I was too ill. As you can see he had never done them before and it didn't end well.

Why this bunny is not moving?Doesn't she/he knows who I am?For crying out loud I am Florida - the Boski wife.

When I got home today I couldn't believe the amount Butter-Bean's moulted in one day!

Sent from my iPhone using Tapatalk

She's in, in my opinion, an absolutely appalling state. I've taken the photos on my iPhone so they don't show off how bad she is .

Endeavour doesn't do Monday mornings so he says he does not intend to move until it's over !

I can't believe how chilled out these two can be. It's a hard life being a house bun. 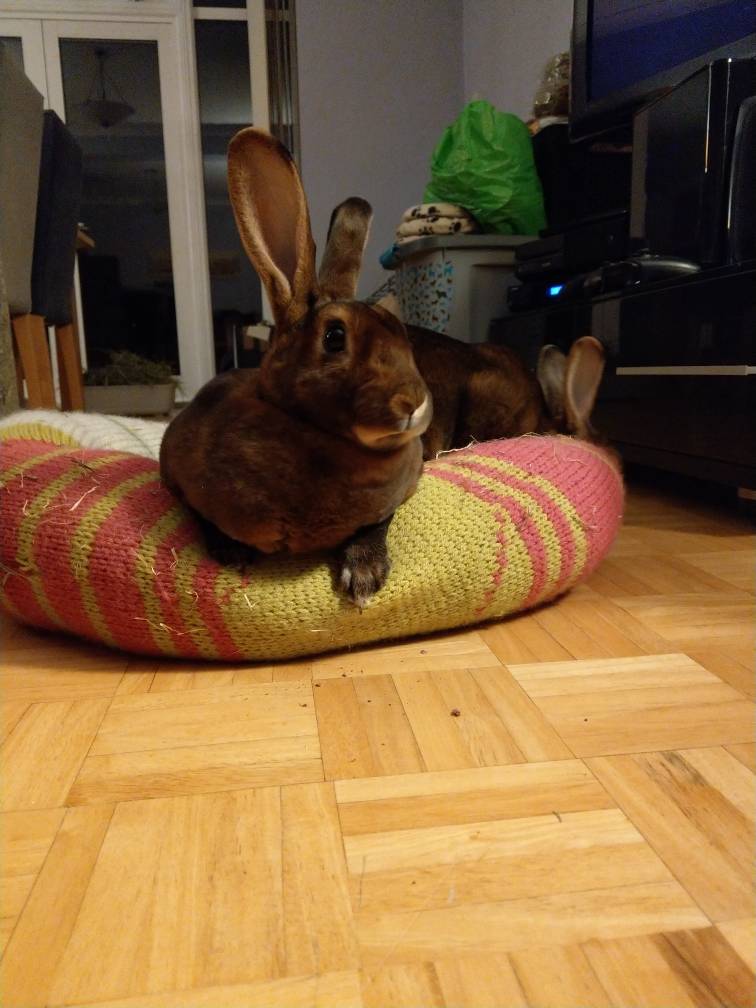 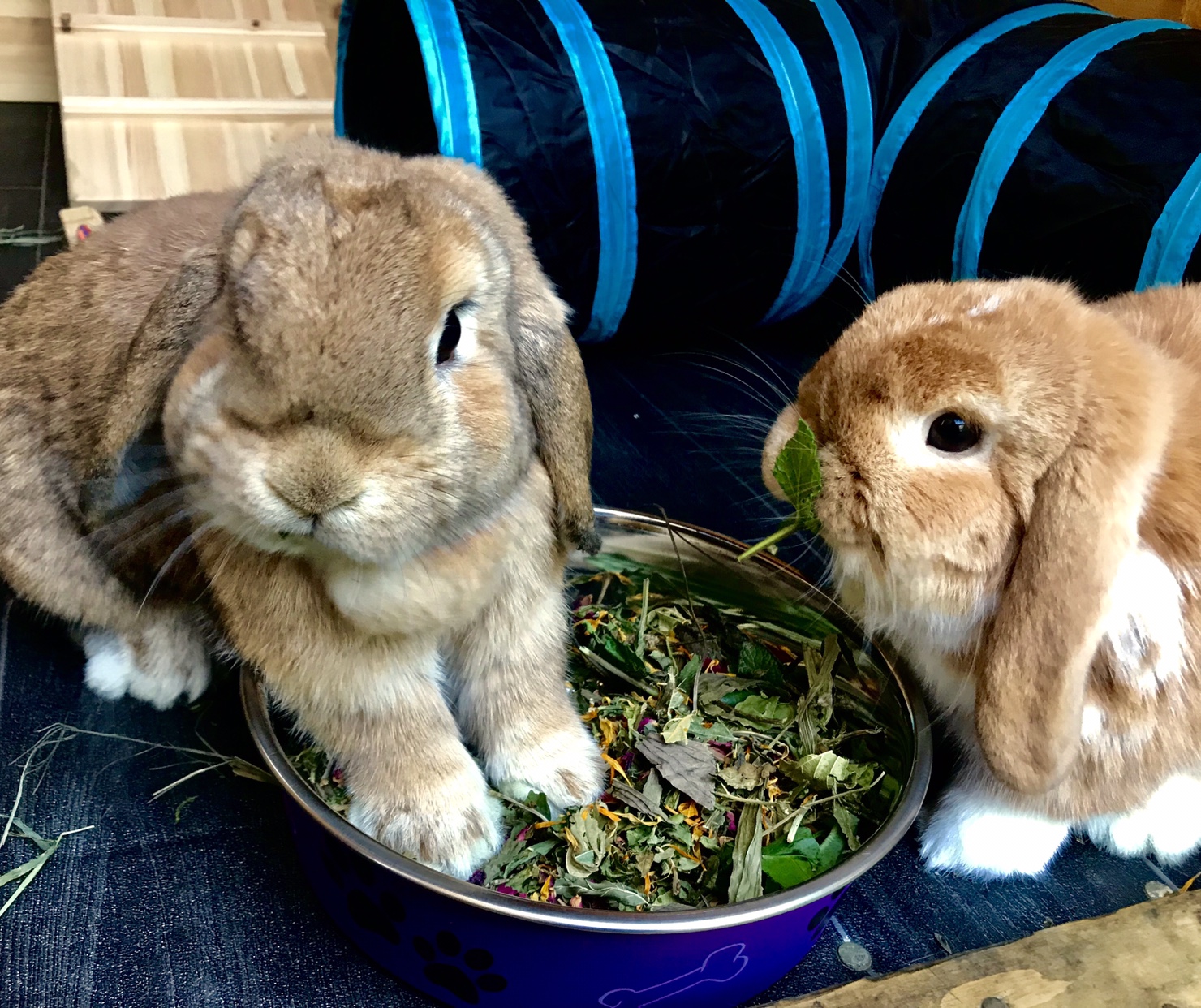 Harris and Iona always love a nice Hop to Forage supper with some fresh veggies! Can't recommend them enough!

This is the first time I have seen a rexy lop! She just came in yesterday - isn't she gorgeous?

I haven't posted any pics of them for ages...... and they're just sooo cute! lol I can't believe how much of a cuddle bun she is. She will come up to the door of the shed or run for a fuss and will happily let you pick ...

She's now back up right and can sit on both her legs like a normal bun, she still can't use both of them though 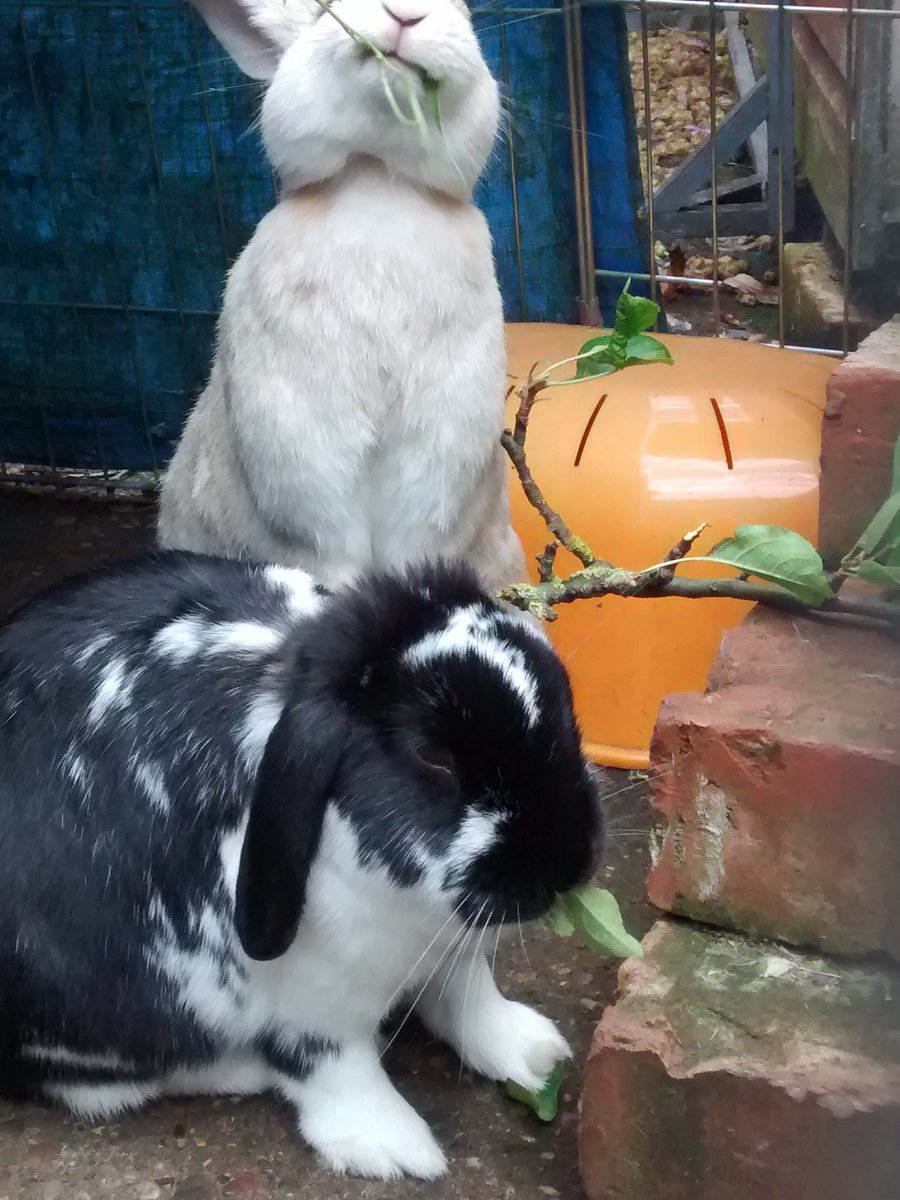 They get willow practicaly daily, but the apple tree isn't on the way home from work for Matt, so he goes out special on mornings he's not working (mostly ...

She doesn't seem to mind the snow at all

I love you... dont forget that

16 years is an amazing lifespan for a rabbit but it doesn't make the pain any easier after loss.

... some rabbits that have been badly treated. They are now safe with us and here is their story. http://forums.rabbitrehome.org.uk/sh...d.php?t =258473 But here's some pics

It's amazing what you can't see unless you get on their level.. His nose is looking messy again. I went out to get a photo of Willow on my phone to send to a friend who hasn't met her yet. I think she was having a nice snooze until I disturbed her!

She wasn't well yesterday so had to come inside for some injections, but she seems back to her normal self today

... her from a pet shop as full Neverland dwarf but my vet doesn't think so, actually she think she part wild so would love other peoples veiws she my first ...

... He wasn't a planned arrival but is very welcome.

Then Floss decided that she wanted to go into the little shelter as well, I didn't think there would be room for both on them, but they squeezed in - rather ...

(Biscuit was there too, but wasn't wanting to have his photo taken...)

This was just fruit juice, and she didn't quite get to it! This picture seems to have popped up on the internet. I can't find out the story behind it though. How odd.

She just couldn't help herself! I know she's my bun so I'm biased but she is mighty cute! Sorry about photo quality, only had my phone handy to take these!

looks like butter wouldn't melt..but he is very aggressive ...

And she says she wanted to show you her bum too (and that isn't a tail, it's just some fur, the tail is only about an inch long and furless) 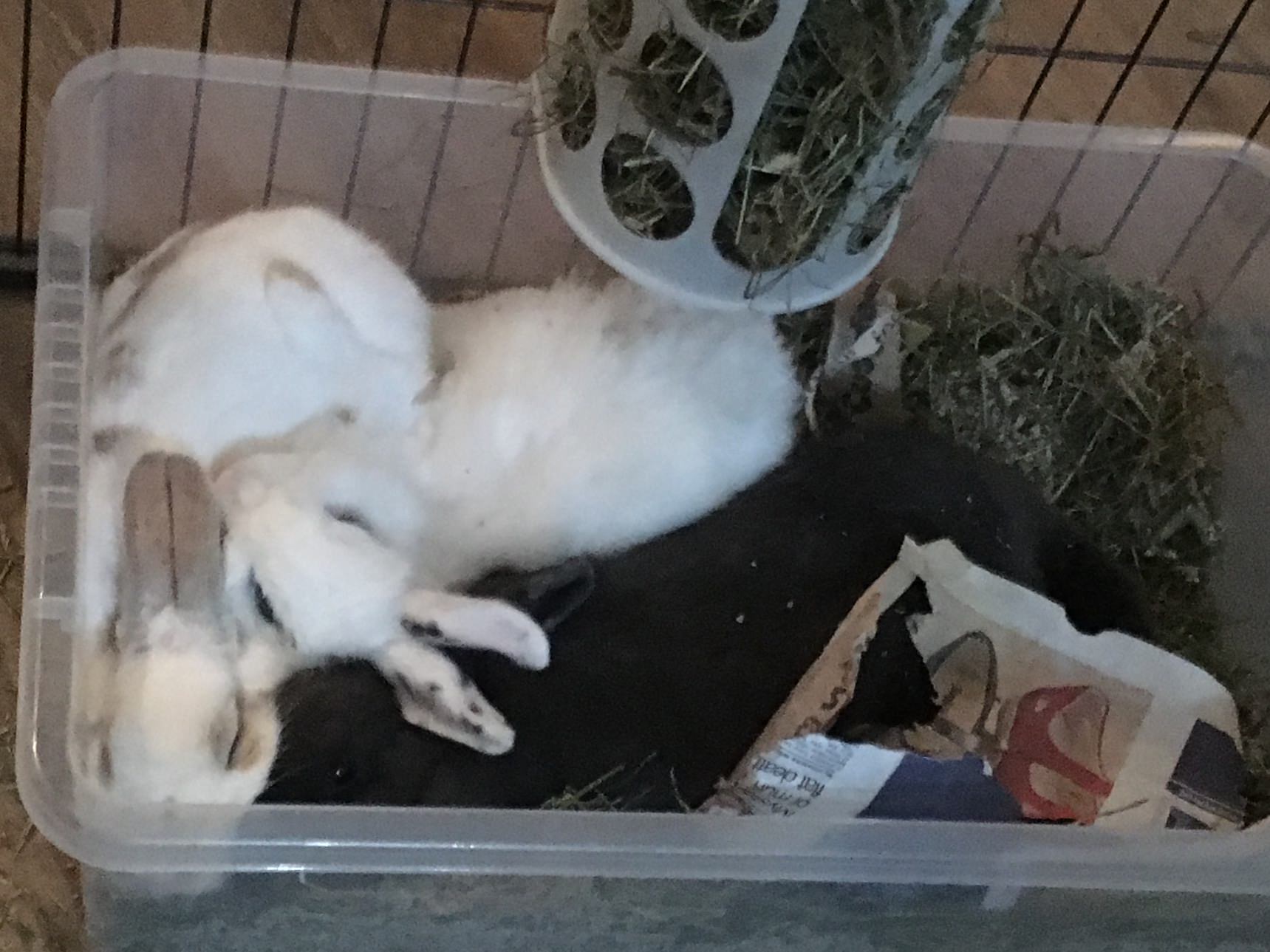 They stayed like that for maybe 20-30 minutes before Millie decided she was off for a hop around but she was back with the boys a couple of minutes later ...

Who was not treated by two different owners? Well now he is on the right treatment he certainly doesn't let it bother him

hmm - I don't think T&F are getting it just yet.

I just caught Alfie like this - I had to walk around the side of the pen to get my camera out, turned it on and took about 10 photos and he didn't stir.

I haven't named her yet... I find naming so hard! If anyone has any suggestions they'd be more than welcome. Her pure white sister is already called ...

... But bright enough in herself and doesn't stay still for photos!

She isn't talking to me because I took her for her VHD jab this evening, so she jumped off my lap the second I sat down, and went to doze on Dave.

I can't pose, I've got to eat my supper!

... came in when the owner was moving and Todd couldn't go with them. They have had him since he was a baby and from the looks of it, left in a hutch. I can't believe you're gone, I miss you so much. 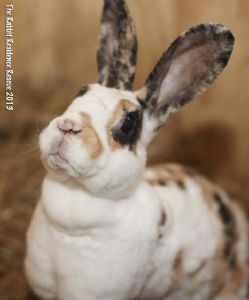 I don't know whats up with my camera recently. Rabbit Forum ...

She has bought this funny long thing that she puts on to take me out. Took me a while to get used to it but means I don't have to be picked up

... out of his hutch more and more, I can't wait til he is a full fledged housebun. He was doing an awful lot of periscoping.. too cute not to share. Enjoy 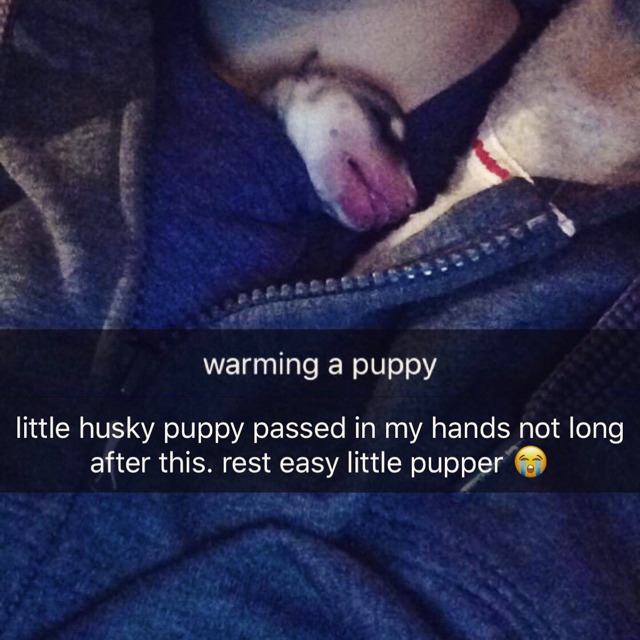 this was two years ago today, my friends dog had premature pups and I went to help her. this little guy wasn't doing well at all and was cold so I shoved ...

I think she over did it with the binkying and then had to lie down for a bit, but that wasn't gonna stop her from munching. 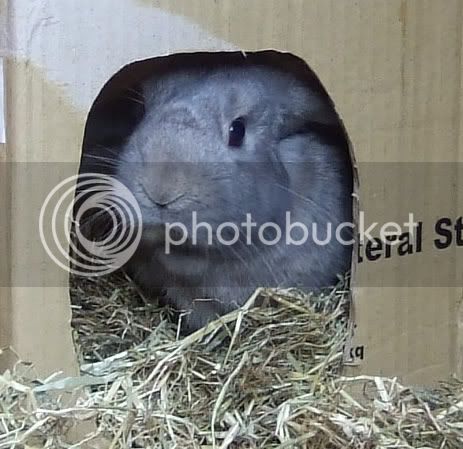 But try as he might, a little bunny can't help appreciating a whole kennel and run when mum finally finished hawking all the junk out and lots of hay to ...

Väiski the baby bunny. He wasn't even a year old when this photo was taken.

Haven't been on for a while but thought I'd share some pics of ted and Mabel who I was bonding last time I logged on .

Sorry we disappeared for a bit... here is a picture of Phoebe relaxing.

... my friends away and just wanted to share these as they're so so cute - I know lots of people don't like rats, but I think these two are very sweet

This is my first bunny Bungee. (lost her in feb this year )

Thread: peanut mini rex which has survived to 5 months ...that he can't fit in the sand box like he used to when he was a baby lol .

Just a note; I don't advocate picking up bunnies by their ears! 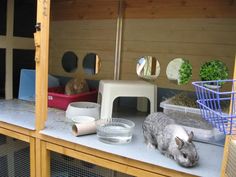 Azlan is about 10 months and he is a lionhead rabbit. Except that he really doesn't have a "mane" like the other rabbits I see. Just really fluffy cheeks!

Sent from my ANE-LX1 using Tapatalk